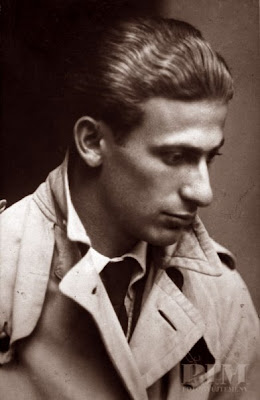 I fell beside him and his corpse turned over,
tight already as a snapping string.
Shot in the neck. "And that's how you'll end too,"
I whisper to myself; "lie still; no moving.
Now patience flowers in death." Then I could hear
"Der springt noch auf !" above, and very near.
Blood mixed with mud was drying on my ear.


Miklós Radnóti, birth name Miklós Glatter (May 5, 1909, Budapest, Austria-Hungary – November 10, 1944, near Abda, Hungary) was a Hungarian poet who fell victim to The Holocaust. Besides writing his own poetry, he translated into Hungarian works of Arthur Rimbaud, Stéphane Mallarmé, Paul Éluard, Guillaume Apollinare and Blaise Cendras.

In the early forties, he was conscripted by the Hungarian Army, but being a Jew, he was assigned to a weaponless support battalion (munkaszolgálat) in the Ukrainian front. In May 1944, the defeated Hungarians retreated and Radnóti's labor battalion was assigned to the Bor, Serbia copper mines. In August 1944, as consequence of Tito's advance, Radnóti's group of 3200 Hungarian Jews was force-marched to Central Hungary, which very few reached alive. Radnóti was fated not to be among them. Throughout these last months of his life, he continued to write poems in a little notebook he kept with him. According to witnesses, in early November 1944, Radnóti was severely beaten by a drunken militiaman, who had been tormenting him for "scribbling". Too weak to continue, he was shot into a mass grave near the village of Abda in Northwestern Hungary. Today, a statue next to the road commemorates his death on this spot. Eighteen months later, his body was unearthed and in the front pocket of his overcoat the small notebook of his final poems was discovered. (His body was later reinterred in Budapest's Kerepesi Cemetery.) These final poems are lyrical and poignant and represent some of the few works of literature composed during the Holocaust that survived. Possibly his best known poem is the above fourth stanza of the Razglednicák, where he describes the shooting of another man and then envisions his own death.

Another grand and haunting poem of Radnóti is "Root" (Wurzel), written in August or September 1944: